Most of this video was recorded with the prerelease version of AXI Combat.
Check out the Update page for some VR gameplay videos.

AXI Combat v1.2 was released on January 1, 2021. For more info about this version see the Update 2 page.

AXI Combat v1.1 was released on July 13, 2020. For more info about this version see the Update page.

AXI Combat can run on any computer that supports OpenCL and atomic extensions, including those below the minimums outlined here.

You will need the program 7-zip to extract the download file. The product key for AXI Combat is AXIApproved! .
Navigate into the AXICombat.win-amd64 folder and you can directly run AXI_Combat.exe . If desired, create a shortcut on your desktop or pin to the taskbar.

AMD, Intel, and Nvidia should provide OpenCL support in their drivers.

You will need to install OpenCL drivers for your system. AMD and Intel drivers are fairly straightforward, however getting Nvidia to work is slightly easier than winning a lottery.

If you cannot connect to the AXI server (the hostname box flashes red if you try to start or join a game), then you can press the Start Server button in the lower right of the main menu.
Copy the IP address shown in the pop-up window (some form of 123.456.78.9, Mac and Linux have an extra :2980) into the hostname box (with a green border). Then you should be able to play regularly. Other devices on the same network can connect to this IP address. You can also set up port forwarding to let devices from external networks connect to your server.

Additional settings can be accessed in the file Settings.txt.
Set Record = 1 to save a video of your adventures to Test.avi. This will be overwritten so you may want to rename it each time.
Change FOV to change the field of view.

Press F11 to enter fullscreen mode (not available in the main menu).

On Windows (without Active Fullscreen), before pressing F11, first move your cursor all the way into the top-left corner of the screen.
Then press the Win and + keys simultaneously to activate Windows Magnifier.
(If necessary, minimize the pop-up window and put your cursor back to the top-left corner.)
Then press F11 to enter fullscreen mode. Do not move your mouse.
Then press the Win and + keys again until you reach the desired zoom level.
Now you can play AXI Combat in fullscreen.

On Mac OSX, first enable zoom under Settings > Accessibility.
Press Fn and F10 to enter fullscreen mode. Make sure the mouse is being captured (it stays in the render frame).
Then hold Ctrl and scroll up to zoom in until you reach the desired zoom level.
Now you can play AXI Combat in fullscreen.

On Ubuntu, first enable zoom under Settings > Accessibility.
Press Win, Alt, and 8 keys simultaneously to activate zoom.
Move your cursor to the top-left corner of the screen.
Then press F11 to enter fullscreen mode. Do not move your mouse.
Press Win, Alt, and + to zoom in.
Now you can play AXI Combat in fullscreen.

Because of Mac OSX's improper key debounce handling, only one key that is held down will be received at a time.
You can remedy this by pressing the desired keys repeatedly.

The last part of the credits might have overlapping text on some Windows systems. This is caused by mismatching system fonts.

On very old or low-end devices, drivers can interrupt the rendering if the framerate is too low (< 2fps) and may cause your entire system to freeze for up to ~30 seconds.
Any computer that is at or above the minimums outlined in the System Requirements will be perfectly fine. 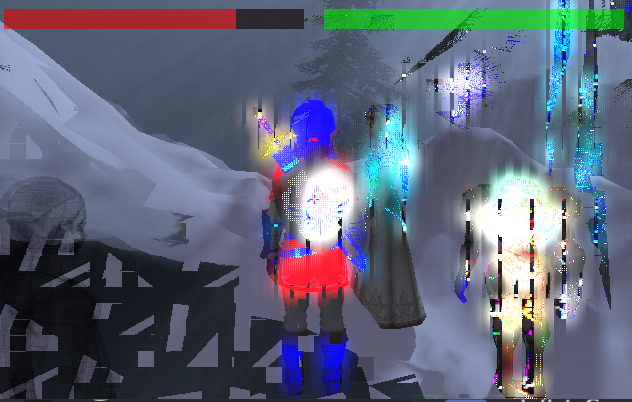 AXI Combat typically runs around 10-20 times slower than regular games due to its software-only OpenCL tiled rasterization pipeline (AXI Visualizer).
This is comparable to state-of-the art software rasterizers such as CudaRaster and cuRE which are less than 10 times slower than the hardware graphics pipeline but use the proprietary CUDA language.

Source code is available via Github.